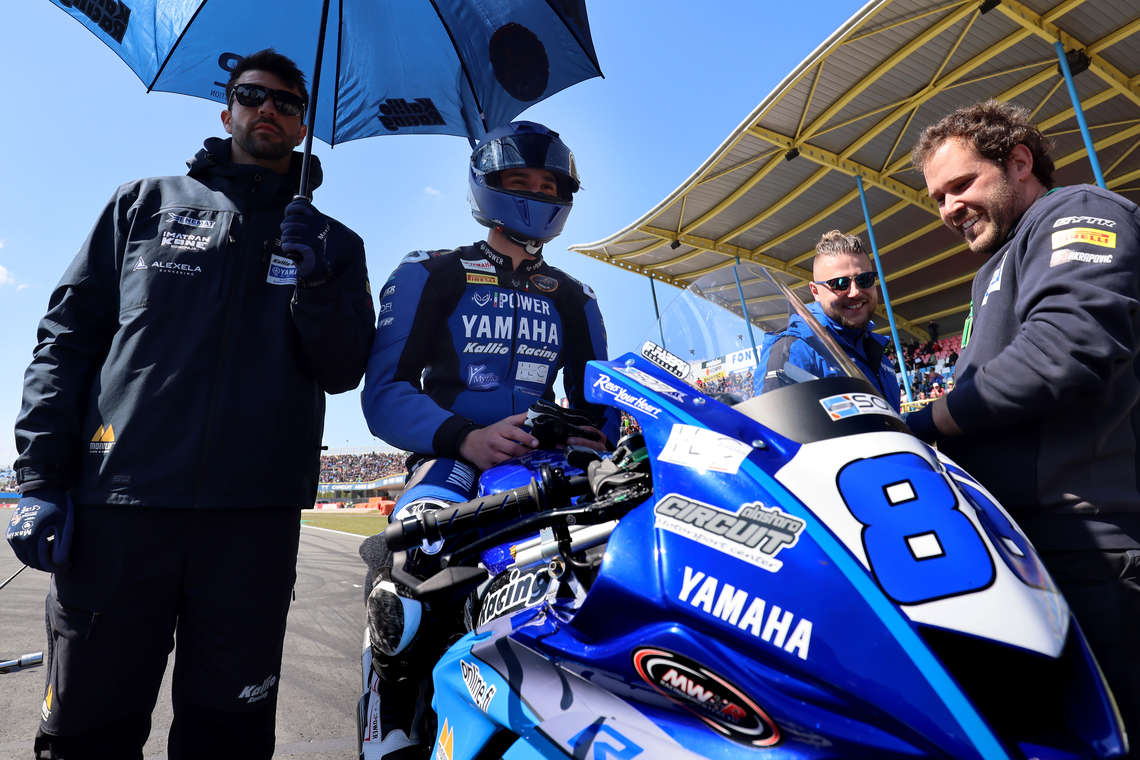 Second race weekend of the 2022 season

The FIM Supersport World Championship’s second race weekend was run last weekend in the Netherlands, on the Assen Circuit. “It's always nice to come to Assen, we get to see a lot of acquaintances here and Assen has always been a bit like a home track for us,” says Vesa Kallio, Kallio Racing's team manager.

The weekend got off to a promising start. In Saturday's Superpole, Patrick Hobelsberger stretched nicely to place seven, and Alessandro Zetti started for the races from 30th position on the grid.

The start of Saturday's race was challenging, as Patrick Hobelsberger's start didn’t succeed and at the first turns of the race he dropped back around the middle of the group. He got nicely reattached to the rhythm though and fought himself back into the top ten. To the finish, Hobelsberger raced at 8th, which is the best ranking of his career at WSSP.

We headed into Sunday's race with confidence, but the day was difficult. Hobelsberger's start failed on Sunday also, and due to the crash of Cluzel and Van Straalen in the first turn of the race, Hobelsberger drifted off the track, dropping all the way to the tail in the standings. “The best edge of riding was probably lost in the chaos of the first turns, and after that, the necessary final spurt was no longer found,” Vesa Kallio ponders. On Sunday, Hobelsberger crossed the finish line in 16th place.

For Alessandro Zetti, the Assen circuit was new, and it is known that the track is challenging for first-timers. The first day of the weekend was spent exploring and learning about the track. ”There was already a clear improvement in the lap time in Saturday's Superpole and the expectation was that we would be able to fight with riders at the same level,” says Vesa Kallio. Unfortunately for Zetti, Saturday's race ended in a crash on the first lap.
On Sunday, Alessandro Zetti raced to 24th position. “Saturday's crash of course complicated the learning process as important laps were left unridden, and that was reflected in Sunday's race, which was difficult. We must now carefully analyze which things were successful in Assen and what we could improve on the next race in Estoril,” Vesa Kallio says.

Patrick Hobelsberger:
Friday in Assen was a pretty tricky day, it was really hard to go fast, and I think at the end of the day we were P16 or something. But I was quite confident for Saturday because it looked like we found some things on the bike which could help me to ride and to improve. On Saturday morning at the Superpole I was a bit nervous, because in Aragon I struggled quite a lot with my one lap speed and Superpole is all about one lap speed, but we were able to improve even that, which was really great. I was P7 and everyone was pretty happy, I was feeling really good, and I was really confident for the race. At race one I had a really bad start and I had a collision in the first turn, which pushed me off track and to P15, but I was still able to make a quick progress and I finished the race in P8 after the red flag. The red flag stopped my progress, I was waiting for the last lap to pass the guy in front of me for P7. On Sunday in the second race there was a pretty dangerous situation directly after the start at turn two, as Van Straalen and Cluzel crashed, and I had to run off the track to avoid hitting Van Straalen, because he was laying on the track. It was a really dangerous moment and at the same moment the bike from Cluzel hit me on the front and pushed me even more off track. I came back after the incident as more or less the only rider who was still on the bike after being involved into that accident. I was before the last one on the track and I still made it to P16. It's a shame, just one position more and I would have got one point, but I was happy to stay on the bike and not to hit or to overrun someone. I'm pretty happy with the one lap speed which was a really big problem, and we were able to solve it already. So, I'm really looking forward to Estoril and I hope I have some more luck there, especially in the first lap which is the problem we have to solve, but for sure there's a solution for everything.

Alessandro Zetti:
Very difficult weekend on a new track for me, in practices I had a good feeling and after qualifying I expected to take a step forward, but unfortunately the races didn't go as we wanted.

The World Supersport season 2022s next race weekend takes place in Portugal, on the Estoril Circuit from 20 to 22 May.