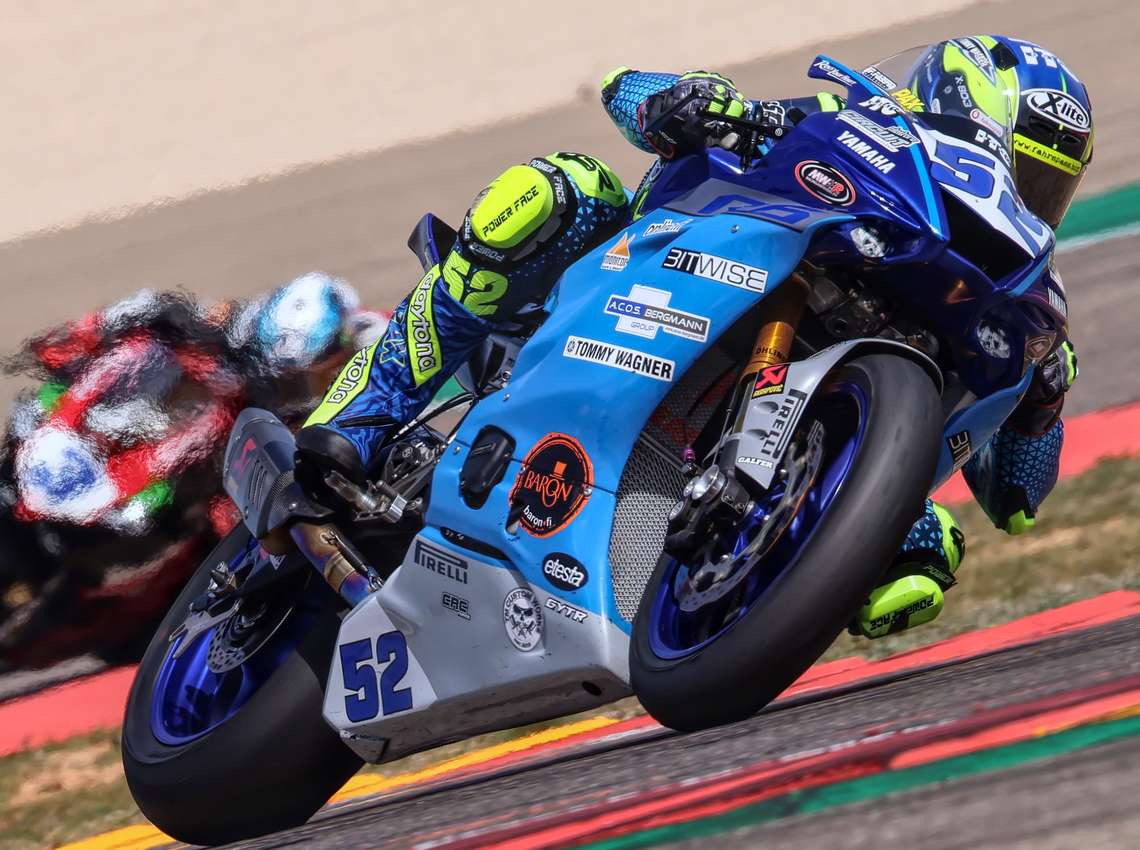 FIM World Supersport Championship’s season 2022 started last weekend in Spain, at the Aragon Circuit. The impact of the new rules and bikes in the WSSP series on competitiveness was unknown beforehand, so we observed circumstances as going towards the first race weekend.

In Saturday’s Superpole, Patrick Hobelsberger raced to 19th place, and Alessandro Zetti ranked 28th.
“It turned out already in the qualifications that the level is really tough and getting into the top ten is a good accomplishment. We didn't succeed in the Superpole, so we had to start both races from too far on the grid,” says Vesa Kallio, team manager of Kallio Racing.

Hobelsberger rose to 10th position in Saturday's race with hard work and by making nice passes in the final laps. Sunday's race was quite like Saturday’s, but the passing attempts didn’t succeed as well and towards the end of the race Hobelsberger lagged slightly behind the group battling for the standings of 8-12. He raced to finish in 13th position. “But we managed to get points on both days”, notes Vesa Kallio.

Alessandro Zetti raced on Saturday in a group that fought for the 20th position. At the end of the race, the rear tyre lost some grip and Zetti had to slow down his pace a little, being ranked 25th (Challenge -class 5th) in the finish. At the end of Sunday’s Warm-Up he crashed, which left a technical problem in the bike and Zetti was unable to start Sunday's race. Vesa Kallio: “It's very unfortunate that this happened, we would have needed these important laps. But we are happy that the rider was not injured in that situation. In the next race, we will continue the development process, and try to make the gap to the top group smaller. We’ll go to Assen with good feelings, and we are aiming to improve the positions achieved in Aragon.”

Patrick Hobelsberger:
Friday was pretty ok, P8 in both of the free practices was a really good place and I had no worries for the race. But to the Superpole we made some changes which were not easy to ride, and just left me back with P19 in the grid. That was very disappointing because I knew that there's a lot of work to do and I won't have the chance to catch up the front group. But I finished on P10 on Saturday, which was really good, I was really happy with it. Sunday was more difficult. There was way more aggression in the group and pretty hard fights with a lot of contacts, which costed a way too much time to keep the connection to the second group fighting for the P8. The qualifying made things way more complicated than expected, but we know that our pace is really good and we should aim for a better qualifying in Assen in the next race. I'm sure we can go with the group for P5-P7, if we have the connection immediately in qualifying. I'm happy with the work of the team, Antti was working really good and the mechanics we're also doing a really good job. We had no issues at all on the whole weekend so pretty happy with that, makes it easier for some progress.

Alessandro Zetti:
Complicated weekend, first time for me with this bike in the dry conditions. We improved every session and made steps forward. Unfortunately, the races did not go as we wanted, but we will go back to Assen.

The World Supersport season 2022s second race will be raced in the Netherlands, on the Assen Circuit from 22 to 24 April 2022.