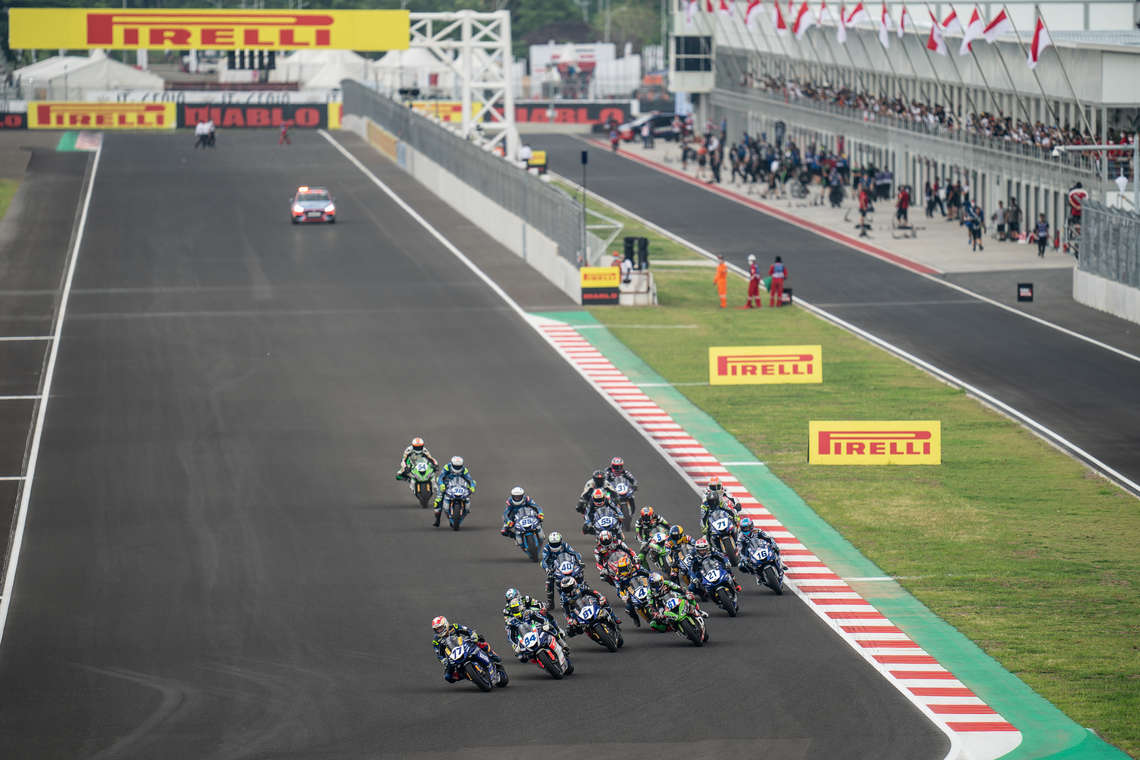 The final race weekend of the FIM Supersport World Championship season 2021 was run in Indonesia, on the new Mandalika circuit.

The start of the weekend was a bit difficult, because while the track area looked good and interesting, the impurity of the track created challenges and finding the grip was difficult. However, better adjustments to the bikes were found for Saturday's Superpole, and Kallio Racing’s both riders improved their lap time fairly. The starting grids for the races were the 12th position for Hannes Soomer and the 18th for Vertti Takala.

As Saturday's race approached, the sky looked gloomy, and the rain began in the warm-up lap. 'There was no certainty as to how hard the rain was going to be, and there was quite a hassle at the paddock as everyone prepared for a possible tire change. However, the rain drenched only part of the track and the other parts remained dry, so most of the riders decided to stay on the track with slicks tires. This turned out to be the right choice as the track dried up quickly and around the half of the race it was already completely dry’, says Kallio Racing’s team manager Vesa Kallio.

The first lap of Hannes Soomer's Saturday’s race was difficult, and he dropped some places down. However, he started a good climb and managed to get behind the top group, but after the track dried up, he was unable to challenge the top riders anymore. However, with a steady ride, he ended the race in 9th position. Vertti Takala also raced well at the beginning of the race, staying on Soomer's heels, but on the final bend of the 9th lap he drifted onto a wet kerb, and had to retire due to a high side crash.

On Sunday the weather was quite the same as on Saturday, as there was little bit water in the air all the time. However, based on Saturday’s experience, riders had a good picture of how much the track can get wet to still be able to use slicks tires. Soomer took a good start into the final race of the season and rode a fine race, finishing 7th. Takala had a bit of trouble in the start, but he fought himself well in 11th position.

Vesa Kallio:
'Luckily Vertti didn't hurt himself in Saturday's crash. Sunday's race was one of Vertti's best of the season, and it wasn't far away that Hannes' pace would have been enough to fight withthe top group. It was great that both boys were able to finish the season with good positions. Thank you all for this season!’

Hannes Soomer:
‘The last race weekend in Mandalika was a great event. The people of Indonesia are very passionate about racing and the track was also very fun. We made a mistake on Friday in Fp2 with the tyres that cost us a lot of time which on a new track like this is crucial. On Saturday and Sunday, we made some good steps forward and improved in both races, just a few steps behind the guys in front. P9 and P7 was an ok way to finish what has been a very tough season for me. There was no podiums this year but we were close and I believe without the injury we could have done a much better job. I want to say thanks to the team for the work all season and to all sponsors who make it possible.’

Vertti Takala:
‘Good weekend overall. The track was nice and functional, and the environment was stunning. Riding felt good throughout the weekend. An unfortunate crash in Saturday’s race, but on Sunday I got a good result from the race and the gap to the top is no longer big either, which is positive. There's been development and I must be satisfied. Thanks to the team for the season, this has been an unforgettable experience. We’ll see what happens in the future. Thank you!’