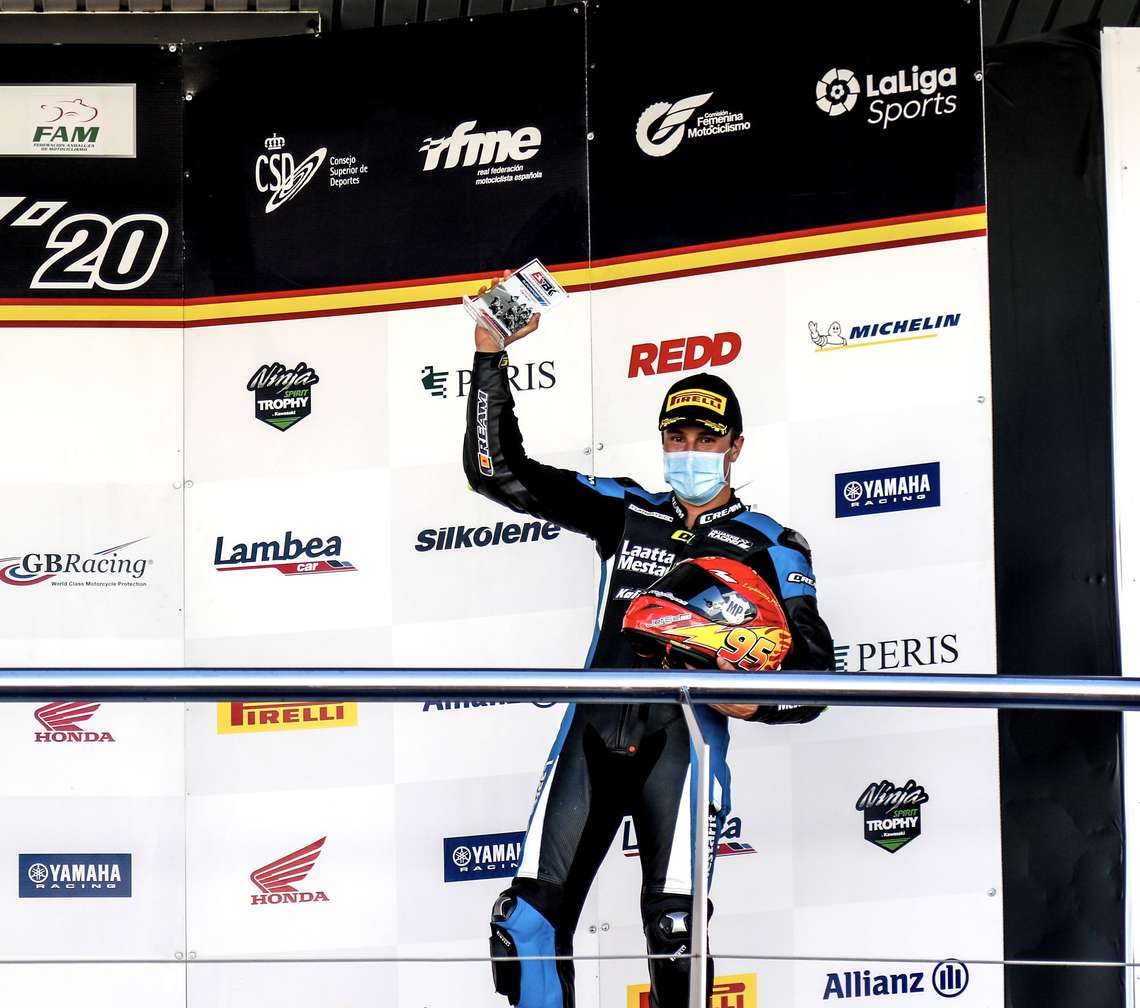 First podium of the season from Jerez

The last race weekend of the ESBK series and Kallio Racing Junior Team’s season 2020 was run in Jerez, Spain. During the practices on Thursday and Friday, the weather was a bit unstable, but the qualifications on Saturday was fortunately able to run on an almost dry track. Vertti Takala was promisingly the third fastest rider in the Superpole, and Kenny Koskinen started the weekend’s races from 8th position on the grid.

Vertti Takala took a sharp start to Saturday's race and rode within the top group of three riders together with Aldeguer and Smith. In fourth place was the champion of the series, Gutierrez. Aldeguer and Smith fought for the first place and Vertti was being third for a long time, only at the end of the race Gutierrez managed to overtake. In the second to last lap Smith rode off the track, and Vertti was able to rose back to third place again.

“In the last lap we were excited to see if Vertti could hold on that third place, and yes he did. He rode a great first podium position in this high-level Supersport class,” Vesa Kallio says happily.

In Sunday’s race Vertti Takala took a good start again, and he was leading the race after the first lap.

“These first laps Vertti fought hard in the top group, but then tires started to lose its grip a little bit too early, and he could no longer match the pace of the top group. However, after a good, sensible ride, his ranking was nicely 5th,” says Vesa Kallio.

Vertti Takala:
“It was a great weekend! I found a good pace already in the free practices. The qualifications were run on a semi-dry track and the result was third position on the grid. In the first race after a good start I rode a clean race, being third in the checkered flag. The first podium in the Spanish championship series felt awesome! On the second race I got a good start and was leading at the beginning, but the wrong choice of tire paid off in the final race. In the checkered flag I was being fifth. The team worked hard throughout the weekend again and it was great to have such a success in the final races! Thanks to the sponsors and family for this season, it was a pleasure to race!”

Kenny Koskinen also rode a good race on Saturday. Soon after the start he had a contact with another bike, which made him lose many positions. However, with some great overtakings at the end of the race, he managed to rise to 9th position (7th in his class). In Sunday’s race the start was successful, and Kenny rode one of his best races of the season. He was able to ride at the same pace with more experienced riders and was being 9th in Sunday’s race (6th in his class).

Kenny Koskinen:
“The Jerez weekend was a little difficult at the beginning, as my riding was a bit lost on Thursday and the weather was really uncertain almost the whole weekend. But we had to adjust to the weather as half of the sessions were run on a partially wet track. The pace increased all the time and in Superpole my pace was enough for 8th position on the grid. When I started the first race, the setup was in place and the start was good, but I had some bad luck as the rider behind me took a hit with my bike in the first lap and I lost seven places. I managed to catch a few riders and made it to the 9th place. From the second race, we tried to get a cleaner and more even competition. The pace was better, and the race was successful, but the ranking was 9th. This season is left behind with a positive mind and now we know what needs to be improved for the next season. Thanks to the team who did a very good job throughout the weekend.”

Rasmus Nurmi was also in Jerez with the Junior Team, trying out riding in the 300cc class. Rasmus rode an intact weekend, being 21st in Saturday’s race and in the two 300cc races he ran on Sunday, he settled for 21st and 17th.

”It was important for him to get to ride here and see the pace of this class. Now he needs to get to practice a lot during the winter and try to ride more races in this series,” says Vesa Kallio.

Rasmus Nurmi:
“This was my first race in the Spanish series. The track and everything here were new to me. The goal was to get into the top 15-20 and it succeeded in the final race. The pace here is really hard, because there are fast-paced bends compared to the Finnish tracks, this caused its own challenges. Likewise, the start is different here because there are so many riders on the line at the same time. Overall, I learned the track pretty quickly and got to improve my time in every practice, even though the weather was variable. I'm really pleased of my results with this experience. And I really got to race with some tough riders.”

Vesa Kallio:
“It’s been great to see that the riders have progressed hugely, and their results have improved. This season brought a lot of successes, of course some failures too, but Vertti's podium gives hope to the future and that Finnish riders have a chance to succeed. Thank you to everyone who has been involved in the making of junior’s journey to the top possible.