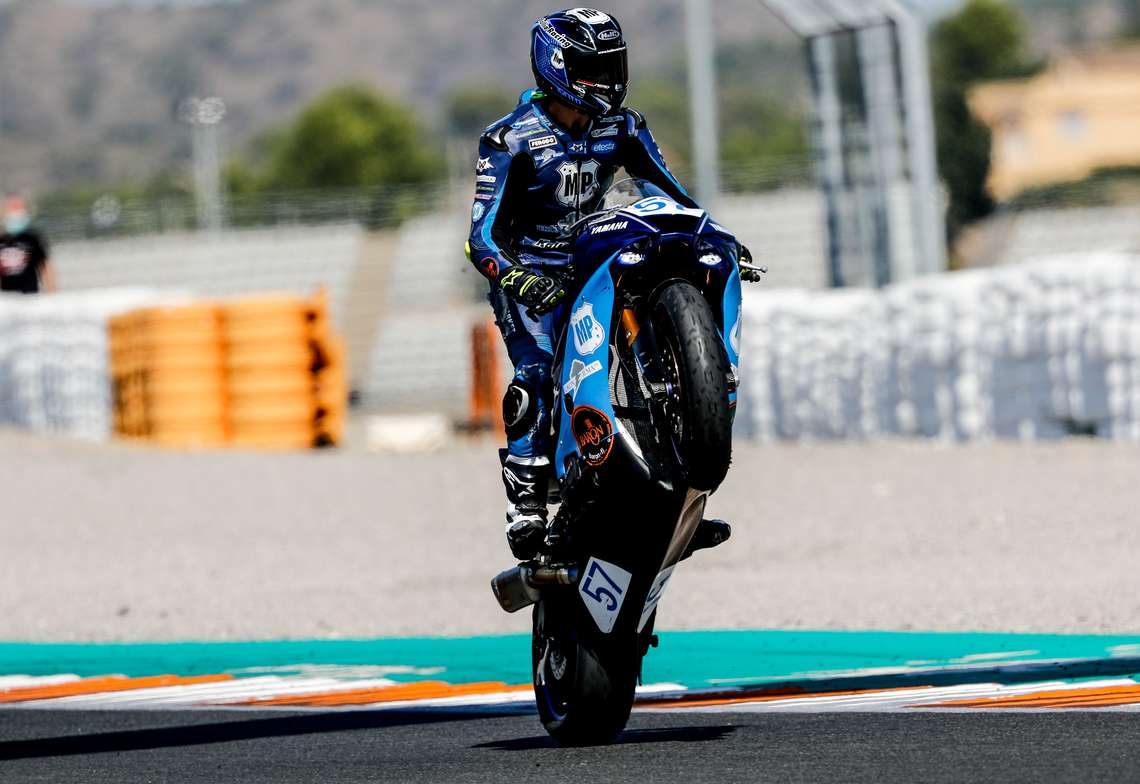 Kallio Racing Junior Team’s race season continued last weekend, as the third race weekend of the Spanish RFME series 2020 season was run in Valencia, Spain. The weather was favourable this time, and the races were run in pleasant, sunny weather. Already the qualifications showed that the team was heading to the right direction. Vertti Takala was the 12th fastest rider in the qualifications and Kenny Koskinen started the race from 18th position on the grid.

There were a few crashes in Saturday’s race and therefore the race had to be suspended with red flags. After the suspension, a five-lap restart were run. Vertti Takala got off to a good start in and immediately caught up with the group of top riders, fighting for places 5 to 7. He finished the race being 6th. In Sunday’s race the top ten riders were awarded with starting positions according to the rankings of Saturday’s race, so Vertti had now the top spot as he started on Sunday from 7th position on the grid. He took a great start and fought for 7th place at the beginning of the race, being able to keep the gap to the top relatively small. Vertti fought a fierce battle with Kyle Smith, but in the end a few small mistakes paid off and Vertti lagged behind from Smith's pace. However, he finished magnificently in 5th position.

Vertti Takala:
“Overall, the weekend was a success. The team did a lot of work and the bike was well adjusted. It was a pleasure to ride it and that also showed in the results. I got good starts at both races and it helped a lot. Now let’s focus on the next race and try to do the same again.”

Kenny Koskinen rode within a big group in Saturday’s race and fought hard for the top 10 places. Kenny finished the weekends first race being 13th. On Sunday Kenny fought behind Vertti for the following standings, riding steady lap times through the whole race. The battle for 7th place in the final lap and the attempt to overtake unfortunately didn’t success, but P8 was a really great performance from Sunday’s race.

Kenny Koskinen:
”Again, a lot was learned from this weekend. It was a really hard weekend, because the track really didn’t fit to my riding style and Saturday’s results weren’t what we wanted. Fortunately, we got the bike’s set-up improved in Sunday’s Warm up, and that reflected to the results of the second race. I am very satisfied with the outcome of the race on Sunday, even though 7th place was so close. The pace was good throughout the race and the gap to the top was smaller than before. Valencia showed well what to practise before the next battles in Jerez in a couple of weeks, where I hope we are going to be stronger again.”

”Saturday’s race was very good, but Sunday’s race was even better. The early season has been a small roller coaster ride for us and the goal of this weekend was to be able to ride steady races, and the riders sure did achieve that. This was the best weekend of the season for both, the team and riders. Now we are one step closer to the top and we know what things need to be improved. Thanks to the mechanics and riders, who did a great job throughout the weekend. The fight will continue in Jerez,” says Vesa Kallio from Kallio Racing.