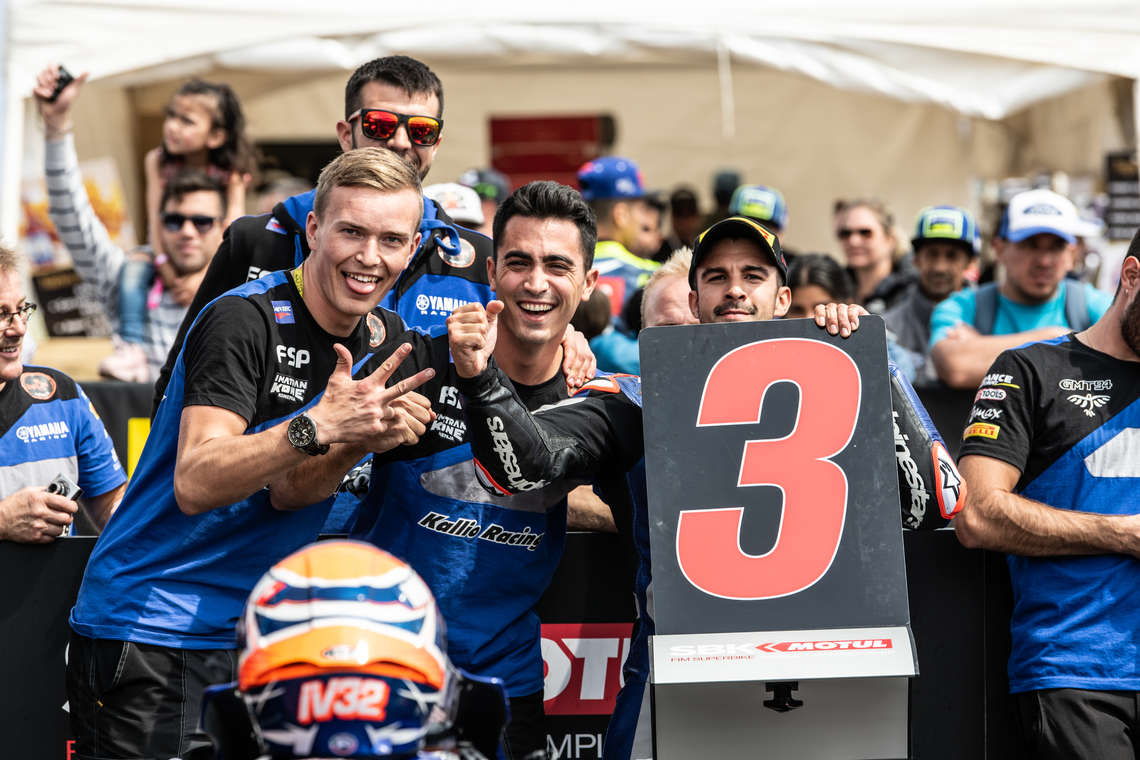 Isaac Viñales again on the podium in Argentina

FIM World Supersport Championship’s season 2019s second to last race was ridden on Sunday in Argentina at San Juan Villicum round. Challenges for the weekend came from difficult and changing circumstances. On Friday the track was dirty and, in the afternoon, when the temperature rose, the track became really slippery.

Fortunately, the weather cooled down before Sunday’s race and the track temperature didn’t rise to the same values as in Saturday’s qualifications. On Saturday the track temperature was as high as +48 degrees Celsius, while in Sunday’s race the temperature was only +38 degrees Celsius. In the race the grip was much better, and the race offered a good fight from start to finish. Kallio Racing’s Spanish rider Isaac Viñales started the race from the 7th position on the grid and made a great rise through the race, fighting up in the rankings. He again made some great overtakes and because of those he took the third place three rounds before the finish and nicely managed to keep this position all the way to the finish line.

”Great follow up to that second place in France, again on the podium and this was yet a strange track for Isaac,” Vesa Kallio smiles.

Isaac Viñales:
”I am very happy with yesterday’s race. We went from less to more and in the end, we are back on the podium on a complicated weekend.”

Austrian rider Thomas Gradinger started the race from the 13th position on the grid and finished being 8th.

”Thomas had quite similar weekend as he had in France. We knew that he had enough pace, but we couldn’t make it appear and were far too behind in the qualifications. Thomas did a good job on Sunday and P8 is by no means a bad performance, but he could have what it takes for even better results,” Vesa Kallio ponders.

Thomas Gradinger:
”I would say all in all it was a bit difficult weekend and the track conditions were quite tricky. We struggled a lot when the temperature rises up and the grip level gets low. Also, in qualifications I think we all had some bad luck but in the end it’s my mistake to not be more in the front. In the race I would say I had a quite good race pace and I could ride the same lap times than the front but in the last races it was not so easy for me to roll up from the back. I could make up some positions and it was a funny fight, but for sure we are not here to fight for the 8th position. We are here for the fight of the top 5 and in theory we can go with the top guys for sure but now the reality looks that we have to be more prepared and work better in the qualifications to be more to the front. Sorry to the team and I’m quite motivated for the next round in Qatar to do much better!”

Belgian rider Loris Cresson was 17th in the qualifications and on Sunday he rode a pretty lonely race, finishing in 14th place.

”Loris’ riding has had a similar basic problem throughout the season and unfortunately we haven’t succeeded in changing that,” Vesa Kallio says.

Loris Cresson:
”Hard weekend, we never find the right setup and the right feeling, the track conditions were very slippery but the others find the setting so there was no reason. See you in Doha!”

The World Supersport season 2019s last race will be ridden In Qatar, Losail International Circuit on 24th - 26th of October 2019.