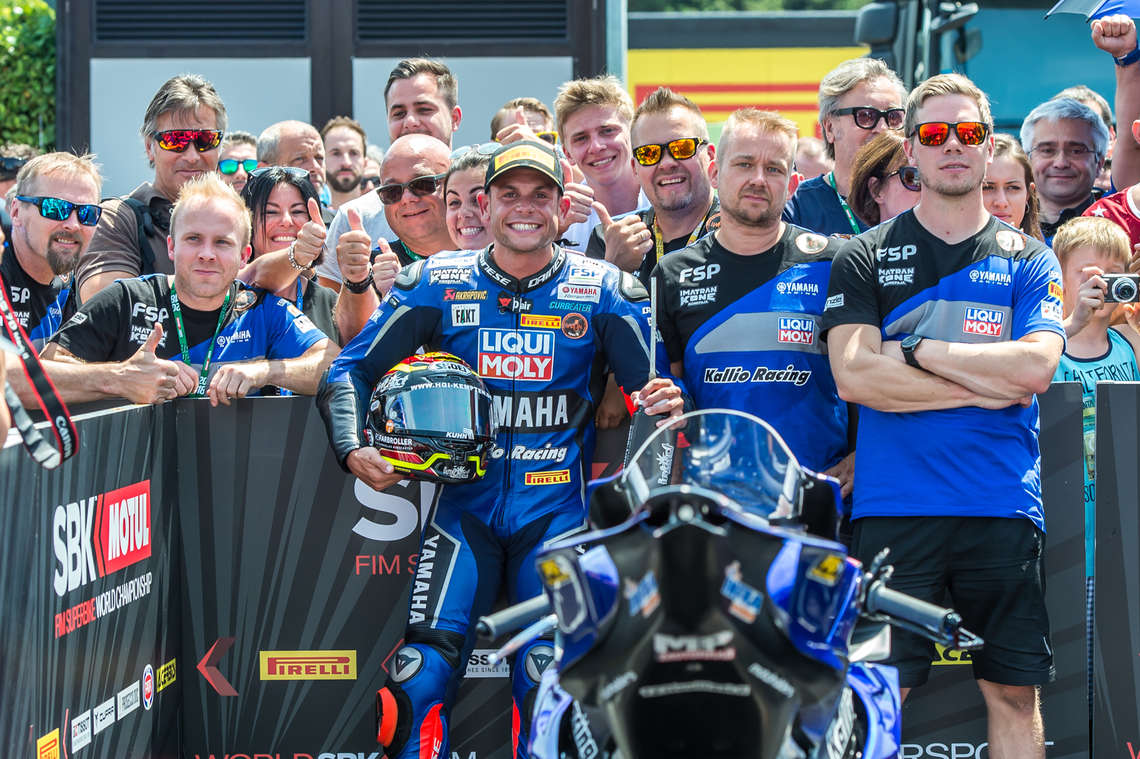 Third podium in a row for Kallio Racing

The eighth Supersport Championship race was ridden on Sunday in Misano, Italy. Kallio Racing team rider Sandro Cortese reached his third podium position in a row in Italy. The young Belgian rider Loris Cresson had to watch the rest of the race from the paddock.

Disappointed in his second position in the last race Cortese headed to Italy with a two-point lead in the Championship. Cortese started from the fifth grid position. The rain from last night dried out in time and Sunday’s race was launched in good conditions.
Cortese climbed up to fourth position already on the second lap and into third on the next. The German pursued the top positions and clocked the fastest laptime of the race. Cortese ended up third 1.423 seconds to Raffaele De Rosa and 3.869 seconds to the race winner Federico Caricasulo.
Cortese managed to keep his biggest rival in the Championship, Jules Cluzel, behind him. Cluzel was only two points behind Cortese before Italy but with the third position Cortese managed to grow the gap into five points.
- The race was very good for us. We struggled a lot this weekend and getting third position was the best we could achieve. Of course you want to win but sometimes we have to take the points home. Thanks to Kallio Racing for the great work this weekend, praised Cortese.
Team manager Vesa Kallio was satisfied with Cortese’s podium position especially as the German secured the lead in the Championship with his third position.
- What a weekend! We had falls and minor technical setbacks but most important of all we maintained our lead in the Championship. Sandro took an okay start but dropped down a few positions in the second corner which of course made the beginning of the race more difficult. After a hard battle Sandro overtook Cluzel but didn’t have a chance against the top two riders today. We are very happy with a podium position though, Kallio summarized.

Kallio Racing Belgian rider Loris Cresson started his race from 25th position as his best superpole lap was disqualified due to small exceed on track limits.
- It was a bit difficult, we struggled quite a lot with the setting on Friday morning. Then in the afternoon unfortunately rain came. Saturday morning was much better, I was feeling confident. Unfortunately in the superpole I didn’t get the same feeling and when I did my best lap, it was cancelled so I qualified 25th and not 15th.
Celebrating his 20th birthday on August Cresson had a magical start for the race and was already 16th after two laps. The young Belgian did a good job fighting for better positions but unfortunately his race ended already on the tenth lap.
- Warm up was better but unfortunately in the race I had difficulties with the bike and in couple of laps I came back 15th but crashed trying to come back in the group for the 8th place. Now we have a long break and I’m happy with the beginning of the season. Thank you Kallio Racing, it will get even better from here, promised Cresson after the race.
Team manager Kallio praised Cresson’s great battle on Sunday’s race.
- Loris did an amazing climb in the beginning but in the halfway of the race the front wheel slipped under him in fourth turn. Unfortunately the race ended in the sand and we got left without points for the first time this season, said Kallio.

Team manager Kallio revealed that in spite of the break in the Championship the team wouldn’t be using beach towels any time soon. The Finn was very satisfied with the success they have had so far this season.
- Now we have a two-month break from racing, but it doesn’t mean a vacation for us. We need to prepare and set up everything ready and do some testing towards the rest of the season. The whole crew has done a great job and worked hard so I have to be proud of where we are at this stage of the season, stated Kallio.